The catacomb are situated by the Via Appia, at the 15th mile, where in Roman times there was a pozzolana quarry.

The former quarry began to be used as a Christian burial place towards the end of the third and beginning of the 4th cent. A.D. The fame of this catacomb was mainly due to the fact that lots of saints and martyrs were buried there as is clearly recorded in the Martyrology of St. Jerome.

In the crypt there are several wall painting such as the one showing Christ between the Sponsores and the Albano martyrs (late 5th - early 6th cent. A.D.), the one representing St. Senator, after whom the catacomb is named (late 4th - early 5th cent A.D.), and the one dating  back to mediaeval times showing Christ Pantocrator between St. Smaragdus and the Mother of God, (11th - 12th cent A.D.).

There is another interesting wall-painting in the apse of the smaller crypt. All the findings excavated within the crypt can be admired in the Albano Museum. 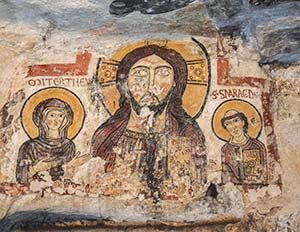