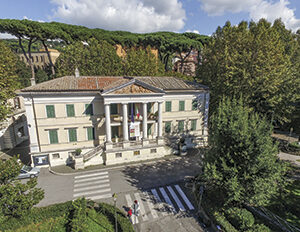 Villa Ferrajoli, the building which houses this museum is neoclassical in style and is situated inside a beautiful park. At the centre of its façade there is a tetrastyle portico topped by a pediment containing a fine relief that illustrates the myth of Ceres teaching Triptolemus the art of agriculture, while the interior is finely decorated with neoclassical renaissance style works by Giovan Battista Caretti. In the twenty three rooms on the three floors of the building a great number of archaeological finds ranging from the late middle ages back to the palaeolithic age are on display. Some very important finds are those about the palaeolithic fauna which date back to the stone age (300.000 - 30.000 years ago) as well as the finds from the Middle Bronze Age and the ones concerning the Latium Civilization, which was at its highest in the “Albano” period (11th - 9th cent). An excellent representation of the archaic period is the small polychrome head of a Latin warrior of the 5th century B.C., which is undoubtedly one of the most important exhibits in the Museum, together with a high-relief from a temple, showing a scene of Maenads and Satyrs dancing. The museum also exhibits votive objects of the republican period coming from local sanctuaries while the daily life of that time is represented by a number of objects which are arranged according to thematic criteria. The following rooms witness the presence of a number of Roman villas in the area, such as the one at Cavallacci from which the marble Head of  Tiberius Gemellus comes, that belonging to Pompey which gave us a lot of very valuable marble finds and the one near Cancelliera where the statue of Faustina the Elder was found. Video screen and numerous illustrative panels provide further information for visitors. The Museum also has a considerable collection of graphic art which boasts a number of works by Giovan Battista Piranesi and other great artists, dating from the 1600s to the early 1900s.