The Cathedral stands on the ruins of the ancient basilica that was built by the emperor Constantine.In the crypt there are still some of the Ionic capitals of the paleochristian basilica that was rebuilt by Pope Leo III (795-815 A.D.) after it had been destroyed by a devastating fire. This church underwent several alterations such as the construction of a graveyard connected to it or the edification of a small Sacristy but the main change was made by Cardinal Fabrizio Paolucci who had the present façade built in 1772 to the design of the architect Carlo Buratti. However, the cathedral reached its present aspect only in 1913 after more than 50 years of adaptations and restorations that were carried out with the financial contribution of the people of Albano. Thanks to all these restorations a row of columns belonging to the mediaeval cathedral built by Leo III was brought to light and the church was dedicated to St. Pancras as well as to St. John the Baptist, since both are patron saints of Albano. Inside the building there is a magnificent marble sarcophagus of the paleochristian period with a figure in aptitude of prayer in the centre. The interior of the cathedral is inneoclassical taste and is divided into three aisles with six chapels along the sides where some very interesting paintings dating to the XVIII century can be admired. The monogram of Christ stands out in the apse above three large paintings depicting respectively the finding of the Holy Cross by St. Helena (left), the glory of St. Pancras (centre) and the apparition of the Holy Cross to Constantine (right). Not far from the cathedral, at Via A. De Gasperi, there is the charming Episcopal palace, built in 1725 by Cardinal Nicola Lercari, Secretary of State to Pope Benedict XIII.

Convent of Capuchin friars with the Church of Saint Francis 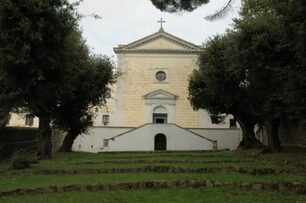 The building was constructed according to classical conventual criteria in1619. This one-isle church stands to well represent the simplicity of Franciscan spirit. Over the high altar there is a beautiful altar-piece of considerable size. It bears the signature of the painter Gherardo delle Notti and is dated to 1618. The painting portrays the princess Flaminia Colonna Gonzaga facing towards the Madonna and Child, while St. Bonaventura contemplates the vision of St. Francis. In the background of the picture we can see the convent of Palazzola with Monte Cavo behind it. In the right-hand chapel there is a sculptural group representing the Nativity: the baby Jesus is surrounded by the Virgin Mary, St. Joseph, the ox and the ass. It is the work of A. Bolgi and S. Speranza, artists of the Bernini school, and it was made in about1633.

Convent and Church of St. Paul

Both the convent and the church were built in about 1282 by Cardinal Giacomo Savelli who became Pope Honorius IV later on.
In 1710 the painter Gaspar Van Wittel depicted the church and the adjoining convent in occasion of the visit to Albano by Pope Clement XI. (today at the Museum of Florence Pitti). In 1769 Cardinal Marco Antonio Colonna restored the whole building completely: especially the interior of the church was changed considerably, giving it a rather elaborate Baroque appearance, while the façade is in neoclassical style. The many canvases which decorate the church date back to the XVII and XVIII centuries. The most noteworthy is the one behind the altar representing the anointment of St. Paul, a late 17th century work by the painter Pietro da Cortona. The vault of the aisle is decorated with a fine 19th-century fresco that can be attributed to Gagliardi, a painter who was very active in Albano at that time. Under the altar in the chapel on the left there is the body of St. Caspar Del Bufalo, the founder of the Missionaries of the Precious Blood.

The convent and the church were built in about the mid 16th century where probably there was the church of St. Senator which stood over the catacomb bearing the same name, but it reached its present aspect in 1687 thanks to the relevant contribution of Albano Municipality. The high altar, just like every other decoration of the church, is baroque in taste and received its polychrome marble decoration in the 1700s. Behind the altar there is a structure with a tympanum containing a painting of the Madonna and Child surrounded by angels. The Madonna’s robe is adorned with a star, this is what gave the church its particular name. On the wall that divides the presbytery in two, there are four plaster casts. The splendid coat-of arms of the Savelli princes, who were seigneurs of Albano for several centuries, stand out on the back wall. Next to the church is the historical public graveyard of the town, over whose entrance we can read the inscription telling the year of its consecration, 1833. 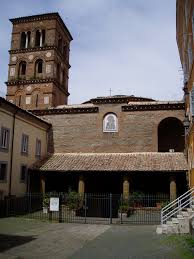 This church was built by Pope Ormisda (514 - 523 A.D.) from one of the big rooms of the baths that emperor Caracalla built for the legionaries stationing in Albano. In the 12th century it was restored deeply and other changes were made in the 14th century of which some can still be noticed today. The most noteworthy of them is the pointed arch with marble columns and brackets above a door on the western side of the church. In 1440 the church, which was nearly destroyed, become a property of the Savelli family who used it as a cemetery. The tombs where some members of this family are buried can now be seen in the church. There are also some marble trabeations of Severian period which have been transformed into altars and balustrades. On the walls we can still admire some frescos among which the finest are the one of the Virgin in a niche of Byzantine period and the larger one showing St. Margaret and St. Honofrius (12th - 13th cent). Other fine works are the large 16th century altar-piece with a representation of St. Peter receiving the keys, and the eighteenth-century standards. Last but not least, two finely decorated, imperial Roman trabeations that have been used as door-jambs can be admired outside the church on the eastern side together with the beautiful twelfth-century Romanesque bell-tower.