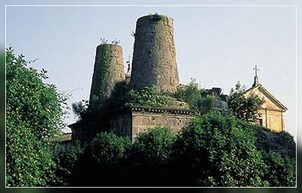 The monument is a unique case for its history which is so connected to myth and legend and for its architecture which reminds us of the Etruscan tombs in Volterra. It is totally built in huge peperino blocks; on the square base there were four truncated cones on the corners and probably a bigger fifth one stood on the drum-shaped central base. The mausoleum, which was erected during the republican period cannot be dedicated to the Horatii and Curiatii brothers. Some scholars suggest it is an erudite reconstruction of the tomb of Arrunsby members of the Arruntia family who possessed estates in the area.

The Catacomb of St. Senator

The catacomb are situated by the Via Appia, at the 15th mile, where in Roman times there was a pozzolana quarry. The former quarry began to be used as a Christian burial place towards the end of the third and beginning of the 4th cent. A.D. The fame of this catacomb was mainly due to the fact that lots of saints and martyrs were buried there as is clearly recorded in the Martyrology of St. Jerome. In the crypt there are several wall painting such as the one showing Christ between the Sponsores and the Albano martyrs (late 5th - early 6th cent. A.D.), the one representing St. Senator, after whom the catacomb is named (late 4th - early 5th cent A.D.), and the one dating back to mediaeval times showing Christ Pantocrator between St. Smaragdus and the Mother of God, (11th - 12th cent A.D.). There is another interesting wall-painting in the apse of the smaller crypt. All the findings excavated within the crypt can be admired in the Albano Museum. 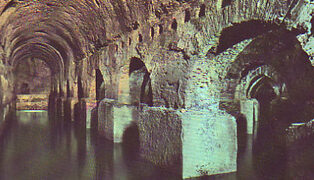 The cistern was designed and built by the legion’s architects to supply water to the camp and the surrounding buildings. The ground-plan is roughly rectangular, with the long sides measuring 47,90 m. and 45,50 m. and the short sides measuring 29,62 m. and 31,90 m. Part of the cistern was built directly out of the rocky bank and the rest was built in masonry. It is divided into five aisles with vaulted roofs that are supported by 36 pillars and is coated with a waterproof plaster (opus signinum).The Albano cistern is not only noteworthy for its size, for it is very large and can store over 10.000 cubic metres of water but also because it is still working today, since it is supplied by Roman conducts with water coming from sources in the slopes of the Albano lake. 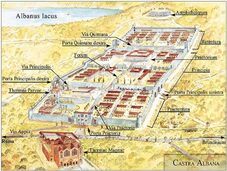 Porta Pretoria and main left Porta of the Legion 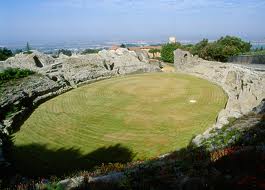 The amphitheatre was built by the masons of the Legion Albana in the first years of the III century outside the north east wall of the camp. This magnificent oval structure was in part dug out of the rocky bank and in part constructed using different building techniques. In the Middle Ages the site was exploited as a source of building materials and was also used as a Christian cemetery. In this period, two oratories were build; one was obtained in the third arch way and the other was completely carved in the rock on the left side of the cavea. All that is left of the original building is the first floor supported by 30-odd arches, part of the triumphal entrances and the whole cavea, which measures 113 m. along the main axis. The original structure is supposed to have been 22 m. high.

This villa, which has been inhabited until the fifth century a.d., was built in the end of the republican period and was at its highest magnificence during the age of Tiberius. The excavations of this villa have so far revealed a great number of very valuable masonry structures and rooms with mosaic or polychrome marble floors. Among the most important finds there are the terracotta decorations and the fine marble head portraying Tiberius Gemellus. All the finds from the excavations are on display in the Albano museum. 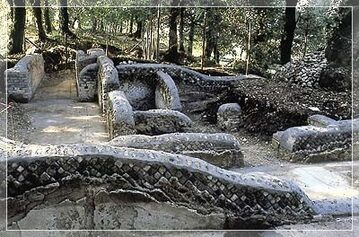 This villa was built by Pompey between 61 and 58 b.c. and its construction was financed with the rich spoils from the war against Mithridates. It had quite a lot of owners for it passed from Pompey to his son Sextus, then to Dolabella. And finally it became part of the estates of emperor Augustus and his successors. The ruins that we can admire now extend over an area of nine hectares, that measures 340 m. in length and 260 m. in breadth. By a close watching of the masonry four different phases of extension, rebuilding and restoration can be noticed. The main body of the villa was erected on an artificial platform facing the sea and was three store high. There were nymphaea, cryptportici and other separate buildings, which all added to the magnificence of the villa, not to mention the numerous valuable statues, polychrome terracotta decorations, gardens and fountains. Some of the best-known finds, that were excavated between 1700 and 1800, are the marble altar carved with the labours of Hercules, the group of two centaurs in polychrome marble and the bearded Bacchus (now all this is kept in the Doria Pamphili Museum in Rome, since this family once owned the park where the remains of the villa have come to light). Other finds from the Villa are now kept in the Albano Museum.