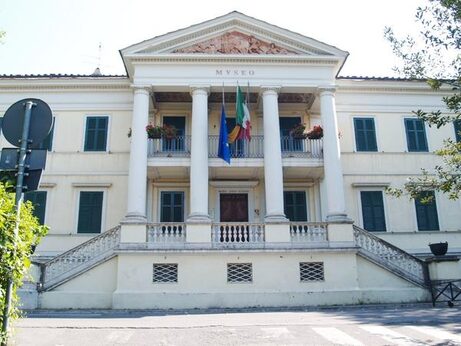 Villa Ferrajoli, the building which houses this museum is neoclassical in style and is situated inside a beautiful park. At the centre of its façade there is a tetrastyle portico topped by a pediment containing a fine relief that illustrates the myth of Ceres teaching Triptolemus the art of agriculture, while the interior is finely decorated with neoclassical renaissance style works by Giovan Battista Caretti. In the twenty three rooms on the three floors of the building a great number of archaeological finds ranging from the late middle ages back to the palaeolithic age are on display. Some very important finds are those about the palaeolithic fauna which date back to the stone age (300.000 - 30.000 years ago) as well as the finds from the Middle Bronze Age and the ones concerning the Latium Civilization, which was at its highest in the “Albano” period (11th - 9th cent). An excellent representation of the archaic period is the small polychrome head of a Latin warrior of the 5th century B.C., which is undoubtedly one of the most important exhibits in the Museum, together with a high-relief from a temple, showing a scene of Maenads and Satyrs dancing. The museum also exhibits votive objects of the republican period coming from local sanctuaries while the daily life of that time is represented by a number of objects which are arranged according to thematic criteria. The following rooms witness the presence of a number of Roman villas in the area, such as the one at Cavallacci from which the marble Head of  Tiberius Gemellus comes, that belonging to Pompey which gave us a lot of very valuable marble finds and the one near Cancelliera where the statue of Faustina the Elder was found. Video screen and numerous illustrative panels provide further information for visitors. The Museum also has a considerable collection of graphic art which boasts a number of works by Giovan Battista Piranesi and other great artists, dating from the 1600s to the early 1900s.

The museum is dedicated to the Second of the three Parthic Legion’s which were created by emperor Septimius Severus between AD 196 and 197 in order to fight the pugnacious people of the Parthians. Since the second legion was among the bravest and most loyal, it gained a special assignment: in AD 202 it was stationed not far from Rome, in Albano, where its headquarters were established. This was an exception to the general rule according to which legions were quartered along the borders of the empire, but such a worthy legion served both as emperor’s personal guardand reenforcement of garrisons defending Rome. In fact, the museum’s premises rise in the highly suggestive area of the Large Baths that the emperor Caracalla, Septimius Severus son and successor, had built for the legion’s soldiers .A faithful reconstruction of the equipment and the garb of the most significant military figures of the Second Legio Parthica resulting from accurate studies in the field of experimental archaeology, opens the museum’s exhibition. Among the leading military positions, the most relevant one is that of the Legion’s Prefect (Praefectus Legionis), of equestrian rank. During the empire of Septimius Severus, in all the three Parthic Legions he replaced the figure of the Legate, of senatorial rank, and was placed under the direct authority of the emperor. In this room, some significant archaeological finds are on display, like the altar of Cassius Severianus, a prominent character of the Second Parthic Legion. He was the highest-ranking centurion (primipilus) of the Triarii of the First Cohort and officer of the troops in charge of provisioning and surveillance of the camp of Albano. A marble high relief representing the lictorian fasces and marvellous bronze parade shin-guard, on which the god Mars is reproduced, are also exhibited.
The second room is dedicated to the Castra Albana. Pictures and text illustrate the main monuments concerning this camp that are still visible in the town of Albano. Among these, the “Cisternoni” (the Large Reservoirs) stand out for their grandiosity, as they represent the camp’s most important water supply. The “Porta Praetoria” (Pretorian Gate), which was the main entrance to the camp from the Via Appia, the Baths Caracalla had built for his troops, and the amphitheatre placed on a hilltop outside the Castra are also part of the Archaeological circuit of the town. Some marble architectural remains, like the towered head of Tyche-Fortune, are also exhibited and speak for the richness of decoration that were to be found in the buildings of the Castra.
The Legion’s everyday life is documented in the next two rooms. Kitchen and table ware, like dishes in african red-slip ware, amphorae to storewine, oil and the garum (a hot fish-based sauce commonly used in ancient Rome to season food), as well as oil-lamps of various shapes, evidence the circulation of products coming from the provinces of the empire. The relevant amount of coin-finds also documents the lively business activity that must have taken place around the camp. Arrow-tips and lead sling bullets (glandes plumbae) used as projectiles and some odd and unusual objects, like draughts and dices or small lead tesserae that were used as a sort of admission ticket to the amphitheatre, provide further information about life in the Legion.
Common earthenware or every-day life articles were probably made by local factories, which also produced architectural bricks and pantiles. Some of these still rectangular or in planta pedis, stamped with letters LIIP (Legio Secunda Parthica) or LIIPS (Legio Secunda Parthica Severiana).The last room is dedicated to the funerary aspect as documented by the discovery of large necropolis and single tombs in the area. Here the inscribed lids of some trunk-shaped sarcophagi in peperino-stone are exhibited, together with the casts of the funerary stele of the boy Euthyches and that of the Legion’s Prince Eptecentus. The original of these are preserved inside the church of ST Maria della Rotonda. Some earthenware finds, like small jars, jugs and oil-lamps discovered in a sepulchral building along the Via Appia are also on display. Finally in the didactical room visitors can actually touch and wear faithful reproduction of the Legion’s military equipment and plunge into the heat of the battle with their imagination. Through documentary films of experimental archaeology, they can learn about the hard and disciplined life of a Roman legionary, the central character of the great military conquests of the Roman Empire and the herald of the Roman civilization in the ancient world.