Villa Doria-Pamphili, or simply villa Doria, is a public park situated in the town of Albano Laziale. It was established in the territory of a noble palace which was built by Cardinal Fabrizio Paolucci in the 18th century and subsequently bought by the Doria family who built both the palace on the Via Appia and the huge park. During world war II the villa was used as a station by a group of soldier of the infantry division “Piacenza” who was displaced by the Germans on September 9th 1943. Later on, on February 1st 1944, the Villa was heavily bombarded by the allied forces and definitely razed to the ground by Albano municipality in 1951. Now the whole area is one of the largest public parks of the Colli Albani with archaeological remains conventionally attributed to a Roman villa owned by Pompey standing in its centre. Presently all the events of  “Albano Estate” are held in the park in the summer and the area is also equiped with a coffee bar, a swimming pool and other sport facilities. 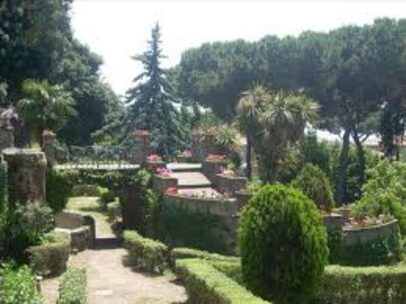