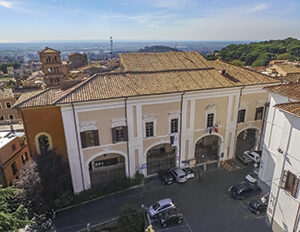 Palazzo Savelli, now Albano Townhall, was built as a fortress along the Via Appia in the Middle Age.
Subsequently it underwent a series of works and was ampled to occupy a much wider area including the remains of the Porta Pretoria and the Church of Saint Peter Apostle behind which was the private chapel of the Savelli family. After Albano was acquired by the Camera Apostolica (1699), part of the palace hosted the Governatorate while the rest of it was left to be the residence of the Stuarts. In 1789, 1791 and 1854 works to the Via Appia were carried out and part of the palace was destroyed. In 1870, after the region of Latium was annexed to the Reign of Italy, the palace became Albano’s townhall and has hosted the Court of Albano for many years until some years ago and since the 30s also that of Marino. Most noteworthy is the stair leading to the noble floor and the ball room which is now the room of the City Council and is now being restructured.