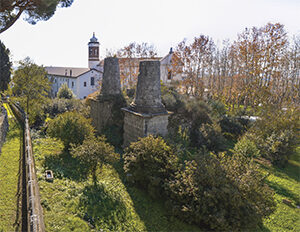 The monument is a unique case for its history which is so connected to myth and legend and for its architecture which reminds us of the Etruscan tombs in Volterra. It is totally built in huge peperino blocks; on the square base there were four truncated cones on the corners and probably a bigger fifth one stood on the drum-shaped central base. The mausoleum, which was erected during the republican period cannot be dedicated to the Horatii and Curiatii brothers. Some scholars suggest it is an erudite reconstruction of the tomb of Arruns by members of the Arruntia family who possessed estates in the area.